You are here:
Strategy 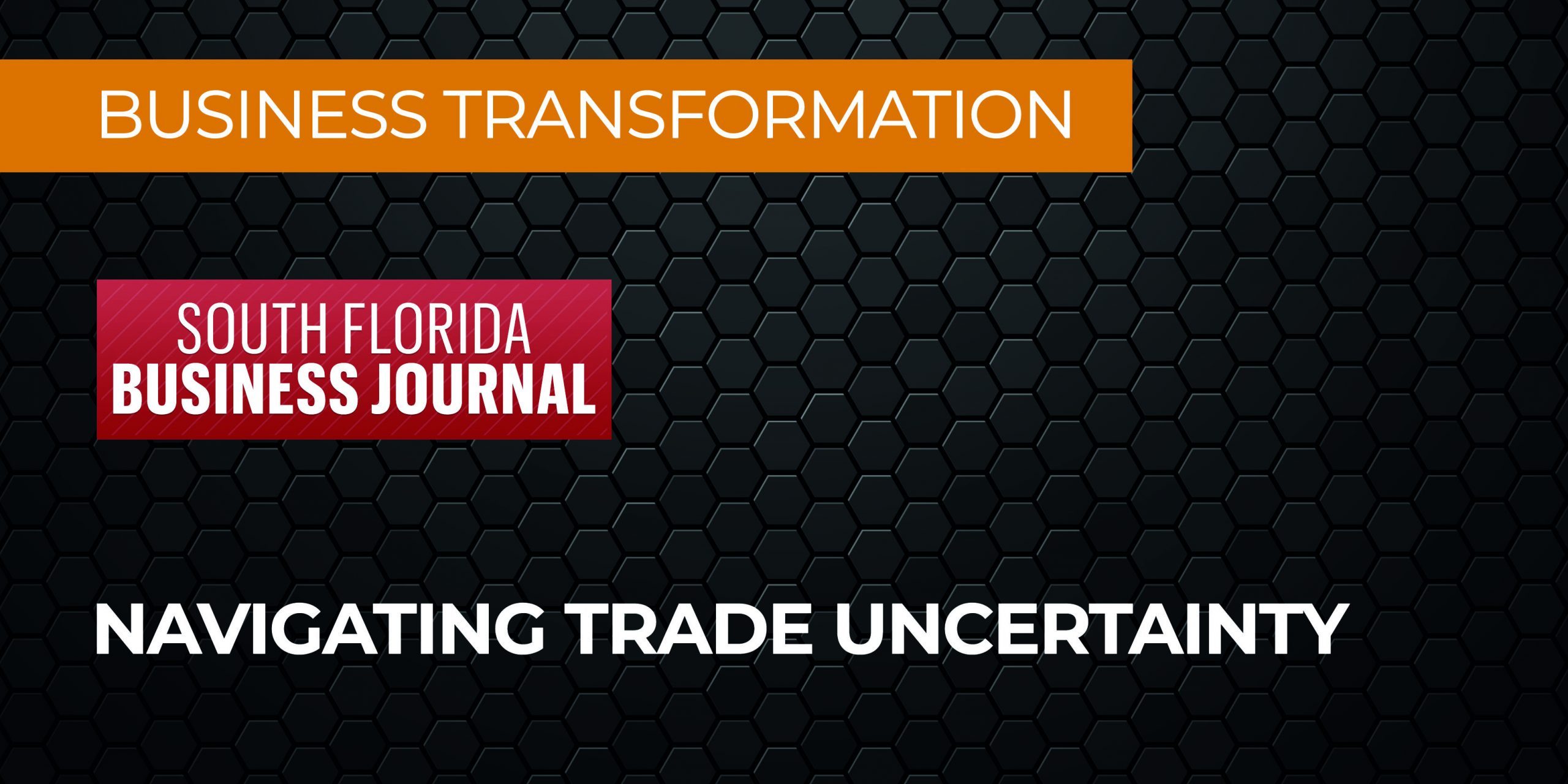 This article was originally featured in the South Florida Business Journal.

Since President Trump took office, the news media has covered the so-called trade war ad nauseam. Businesses are paying attention too. A U.S. Chamber of Commerce survey found that 158 Fortune 500 companies discussed the impact of tariffs and ongoing trade tensions on earnings calls in the first half of this year. While most of the conversation has focused on China and tariffs, there is a bigger picture that is impacting nearly all of our traditional trading partners.

My intention in this article is not to attempt to predict the changing landscape of U.S. trade policy. Regardless of whether you support or oppose these policies, what is certain is that this ideological shift is a reality and business owners should take steps to prepare their companies for the inevitable near and midterm impacts.

No matter the size of your business, you likely directly or indirectly buy components and raw materials from abroad. Changes in tariffs can have a dramatic impact on your price, which could place you at a cost disadvantage relative to your competitors.

I recommend analyzing each of your suppliers, from largest to smallest, to determine which countries you are exposed to. Each year, the Office of the United States Trade Representative puts out a trade policy agenda and annual report. The report includes a list of countries that the U.S. government is currently negotiating with. If your supply chain is heavily reliant on any of these countries, it might be time to look for alternative suppliers. At the very least, keep an eye on the progress of these negotiations so you can move quickly if things take a bad turn.

On the other hand, the report also lists countries where free trade agreements with the U.S. are in force. While products from some of these countries might be more expensive, others are developing countries where you can source affordable components while mitigating trade risk.

As the saying goes, don’t put all of your eggs in one basket. If you source all or most of your supply chain from a single country, and relations with that country deteriorate, your business will be in serious trouble. Make sure that suppliers for different components are located in different countries to decrease your exposure to trade risk with any one country. This is a no-regret move because geographic exposure is a risk aside from the trade considerations. For example, 60% of the world’s supply of critical auto parts were manufactured in the region that was most impacted by the earthquake and tsunami that devastated Japan in 2011. In the days that followed, a General Motors truck plant in Louisiana shut down temporarily for a lack of Japanese-made parts.

It is important to consider that these events can affect both direct and indirect suppliers. German chemical maker Merck produced its entire supply of Xirallic, a pigment used to create the shimmery effect in vehicle paint, in that very same region in Japan. Merck was unable to access its warehouse in the earthquake’s aftermath. As a result, automakers including Ford and Chrysler suspended sales of vehicles in certain colors.

It never hurts to have a backup plan. Develop relationships with alternative suppliers. That way, in the event of trade pressure or other disruptions in the country where one of your suppliers is located, you will be able to source the missing link in your supply chain with minimal disruption to your business. This has the added benefit of increasing your bargaining power over existing suppliers. If a supplier knows you have another potential supplier competing for your business, you may be able to negotiate better payment terms or lower prices.

Prepare for a slower growth world

A recent IMF report has attributed rising trade barriers to its predictions of slower worldwide growth. While the most significant dispute is between the U.S. and China, the rising trade barriers and increasing geopolitical tensions are not relegated to any one country. Overall, trade volume growth in the first half of 2019 fell to 1%, the weakest level since 2012.

In the face of slowing global growth, businesses should consider moving their supply chains closer to home. Businesses that use domestic suppliers have more control over their supply chains while drastically decreasing the risk of geopolitical disputes disrupting shipments. Of course, businesses typically use imported components for a reason: they tend to be cheaper. There are ways to mitigate this risk. By looking at markets with high levels of imports, businesses can leverage the oversupply of imported goods to negotiate lower prices.

Coronavirus is Infecting Our Economy: Brace for a Recession
March 13, 2020