When the ‘Helicopter Money’ Ends 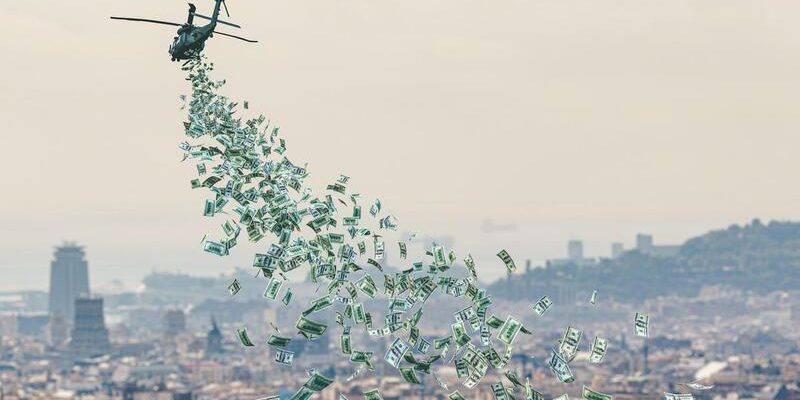 This article was originally published in Forbes.

Newton’s third law says that “for every action, there is an equal and opposite reaction.”  Covid and the government’s response to it set in motion events that have created the current economic environment we’re experiencing.

To figure out where we’re going, I find it helpful to look at the past and see how we arrived here.  As a business owner, here is my narrative of what has happened to us economically over the past two years and where we currently stand.

The arrival of the global pandemic ushered the end of the longest bull run in US history, spanning June 2009 through February 2020.  We were already on borrowed time and due for a correction.  After an initial period feeling like the floor was falling out from beneath us, by the end of summer 2020 we realized that business would continue with some resemblance of normalcy, even if we had to wear masks to minimize outbreaks. The relief came in the way of the government providing unprecedented levels of stimulus through the Federal Reserve, more than doubling our balance sheet overnight.  PPP, expanded unemployment, and various other “helicopter money” programs provided easy money for businesses and individuals across various stimulus programs.

As a result of zero interest rates, money poured into other riskier assets such as real estate and alternative assets in search of yield. This influx of capital resulted in heightened valuations, even though any of these assets had no economic basis (e.g., cryptocurrencies, many VC-backed start-ups, etc.).

Covid also caused many workers to temporarily (to stay home to care for children) or permanently (early retirement) exit the workforce. A number of employees in lower skill positions also received generous unemployment benefits higher than their prior wages that further suppressed the number of available applicants.  With all of that free time on their hands, many of those individuals reflected and decided that they should consider alternative careers and jobs with better job satisfaction and flexibility, resulting in the Great Resignation.

Supply chain logjams also caused economic trouble, disrupting access to foreign products (particularly China, which had numerous strict lockdowns and functionally restricted visitors throughout the pandemic), and resulting in shortages for many goods.  Artificially high demand, brought on by stimulus funds, collided with these restricted inventories. Businesses extrapolated demand levels to continue indefinitely and given long lead times they ordered excess inventory just in case to minimize the chances of future stockouts and to ensure that they could satisfy expected future orders (the business equivalent of hoarding toilet paper).  The decision to place these orders was made easier by lenders extending generous loans with unusually low rates.  This placed further strains on the supply chain. 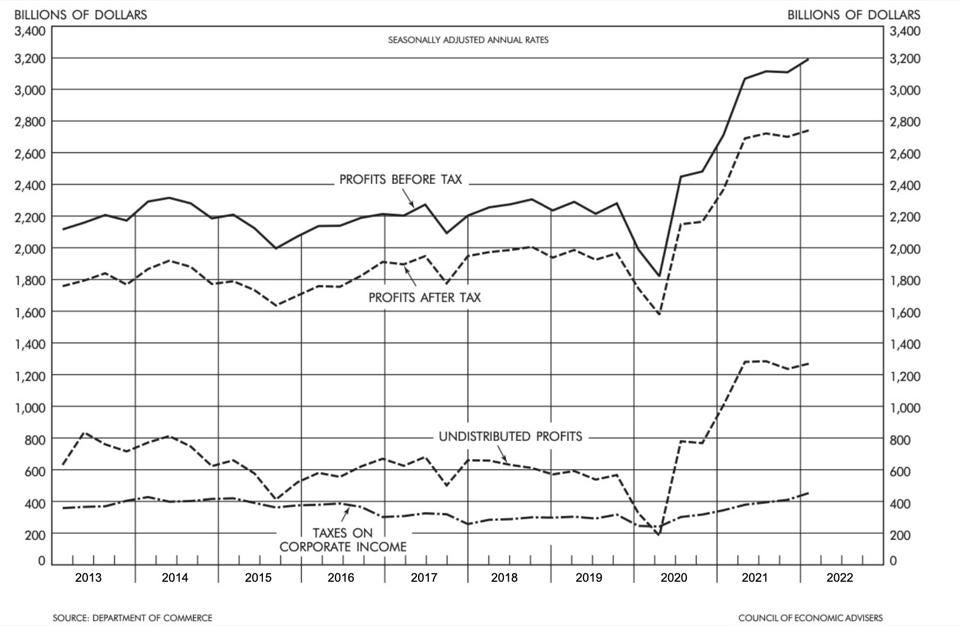 At the time, many businesses experienced their best financial performance in history, significantly higher than long-term averages (although some of this is likely attributable to PPP windfalls). This imbalance of demand than supply eliminated the need to sell (or provide good customer service). Operational execution became more important and companies needed to quickly expand their labor force to quickly accommodate all of the growth.  Attracting labor meant they needed to offer meaningfully higher salaries for new positions and existing workers.   Rising home prices also resulted in significantly higher rents, further driving broad wage inflation.

In case all of this wasn’t complicated enough, the Russian invasion of Ukraine, created a major commodities shortage in oil and grains (wheat, corn, etc.), that has resulted in skyrocketing prices for these critical inputs.

That brings us to today.  Let’s take a quick look at our current situation.

At nearly 9%, consumer price inflation has hit its highest level in over 4 decades, placing Americans in a challenging position as their purchasing power steadily erodes. Gas prices at the pump has averaged over $5 per gallon and has been a particularly visible pain point that will continue as the summer brings the busiest time of the year on roadways. 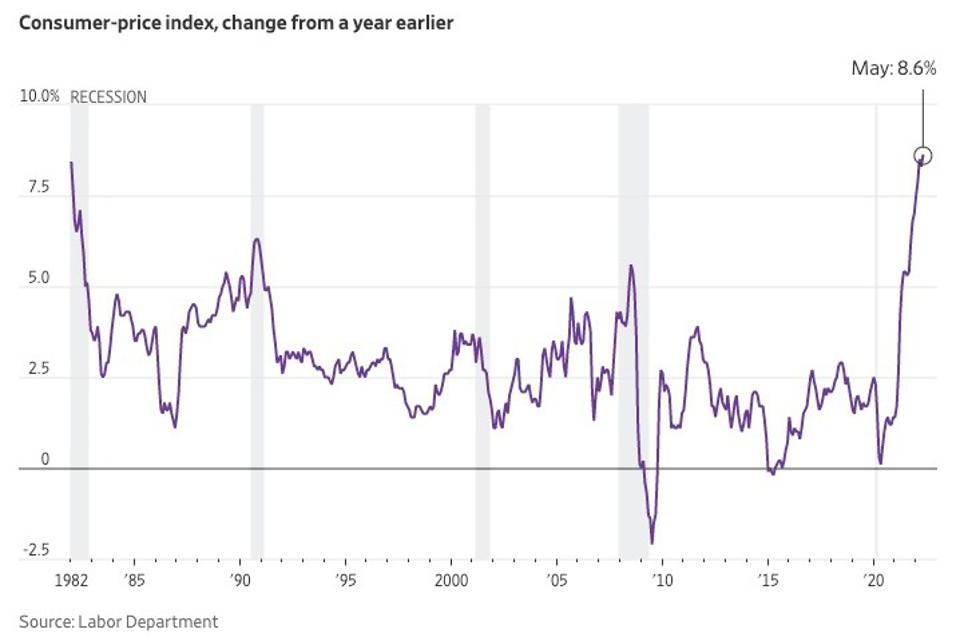 Similarly, businesses are experiencing even higher increases in their costs, as reflected by the producer price index sitting 11% higher than a year ago. While this will likely create a drag on earnings, it also insinuates future price increases to come. 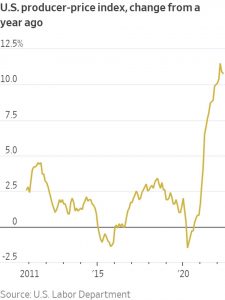 In order to tame this inflation, the government is rapidly increasing interest rates, and recently increased it by 75bps, the largest increase since 1994.

The difficult conditions have certainly impacted the broader economy, with GDP for Q1 2022 experiencing a contraction of 1.5% and the Fed continuing to revise projections downward for Q2 GDP. The stock market has also dropped by nearly 20%, resulting in household net worth falling by over a half of a trillion dollars.

Despite broad pay raises, real wages (accounting for the net effects of inflation) have declined resulting in everyday Americans struggling.  This has manifested in the lowest consumer sentiment in the survey’s history (yes, even lower than the scary early weeks of the pandemic).

Without the support of stimulus money and low interest rates, demand has slowed down.  Combined with the excess ordering that businesses made to prepare for future demand that never materialized, businesses now are left with excess levels of inventory. Walmart and Target, a great bellwether of the broader American consumer, are both indicating that sales of discretionary items has been slowing.

Inflation is front and center and it appears unlikely that we’ll see the political appetite for additional stimulus to save us from future challenges.  I don’t know exactly what will happen, but I can tell you the current conditions are creating various risks for businesses:

While there are also some encouraging signals (e.g. more Americans have the ability to withstand a $400 emergency expense than before), a deep recession appears fairly likely at some point– the question is exactly when.  While immediate strategic shifts are not yet warranted, I do recommend closely monitoring your business’ leading indicators on a weekly basis and developing escalating contingency plans if things deteriorate.  In future articles, I will tackle how to prepare your business, but in the interim, here’s a prior article providing actionable steps in our inflationary environment.

Confronting the Potential of a Depression: The Truth Will Set Us Free
April 16, 2020

Coronavirus is Infecting Our Economy: Brace for a Recession
March 13, 2020
About McCombie Group